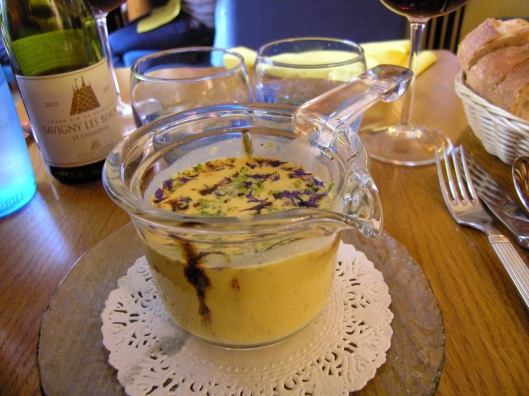 Finding myself nodding madly in agreement at the “ick” factor of making true aspic à la Julie and Julia, dismissing it as a deal killer in any attempt of my own at taking ANY of my cookbooks and tackling them cover to cover, I whinge. But then, there is the memory of bistro lunches of jambon persille, miraculous Potage au potiron and Époisses in Beaune; more incredible soups in Gordes… and that is why I added serious French cookbooks to my library upon returning home. But am afraid to crack them open.

Thus every once in a while I really puzzle at the cooking library. Do I consider cookbooks recreational reading, inspiration or do I actually follow a recipe? When is the last time I turned to my own over stuffed library of ideas rather than see if Mark , Allegra or Epi have a better idea than I do. That tack is mostly expeditious, but perhaps it reflects a lack of planning and discipline on my part. Well, certainly it does, and the cascade of printed out recipes that have yet to be catalogued threaten to collapse at any moment in the walk-in pantry (a grande term for a not-so-grandly managed space – like describing our under-stair wine-storage as a ‘cellar’ ;-). So once a year, maybe more, I really try to thin the herd. A week or so back I posted a silly note/list on FB, and one thing I ‘fessed up to included my most favourite broken-spine cookbooks and where they opened up to. The startling thing was that these were really long-owned and loved books. One dates back to college (really – people had cookbooks even in the 70’s), Anna Thomas’ Vegetarian Epicure, Book Two. Another holds a muffin recipe from Cafe Beaujolais that I have made 432 variations of. Or so I am accused! And – am guilty.

So…where do your cookbooks open to?