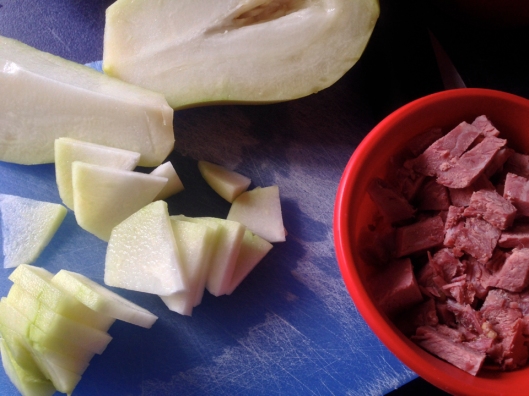 This pear-shaped, pale green and slightly creased vegetable so long has occupied an odd position at the top of my list of exotics from Kansas or Missouri, that the irony of exotic and the land of my paternal grandparents cookery had become a dim remembrance. My Greek mother’s lemony, garlicky and spicy-by-contrast cooking never quite found peace with the kitchen of her in-laws, who came from Missouri and Kansas.  Plain cooking, plain speaking as a Grant Wood painting (and more than a passing resemblance to American Gothic, I have to be honest).

I furthered this myth of kind, but plain, in my own vague memories, believing that garlic was probably not allowed in the front or the back porch door to that house. Nonetheless, I did have good messy times in my grandmother’s 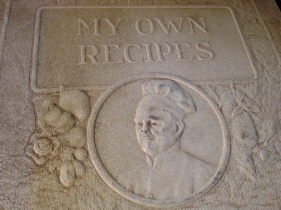 kitchen, allowed to make brownies of a sort that involved one square pan and possibly some Nestle’s Quik, and my grandmother’s frugal home-cultured buttermilk, made to stretch her budget and stored in reused cranberry juice bottles.

I remembered having seen a reference to chayote in one of her handwritten cookbooks (and she had copied, word for word from the recipe pamphlet).

It seemed like some obscure vegetable which might be cooked to death, and then some more just to be sure. I didn’t really know what it looked like until I started noticing them in grocery stores, and I still did not know what one did with one until chayote came up as a main ingredient in a Wok Wednesdays dish. Almost simultaneously, it showed up on a pickle plate at my favourite restaurant. I had the pickle, asked what this lovely tangy but still crunchy item was — and was won over.  The next week I was hunting down a nice example to cook in my wok.

The first dish I made was Grace Young’s Chinese Jamaican Stir-Fried Chicken with Chayote (from Stir Frying to the Sky’s Edge), and the combination of Pickapeppa Sauce with the chayote was both magic and addictive. Now when I see a nice chayote, I automatically add it to my produce, more special than a zucchini or other summer squash.

Like stir-frying cucumbers, or kohlrabi or broccoli stalks, but even better, it tolerated the flurry of movement without falling apart or becoming mushy. In fact you would have to work hard (or follow one of those old recipes where they parboiled then further cooked it), to ruin the pale green perfection I now appreciate.

A hot spell this week left my cooking efforts limp and limited, and I ran the fridge down a bit, wanting to see if I could actually use every bit of produce before replenishing when the weather cools and my inclination to cook returns. Thus this morning, scallions and a chayote figured prominently in a free-style fried rice morning, as a wok dish would be done in minutes, putting minimal heat into a kitchen and house that had not dipped below 80℉ last night and was still hot this morning.

I also spotted some corned beef, the latest sous vide project by my very clever and keen spouse, which satisfied the role of cured meat for my fried rice. Other than prep bowls and cutting boards, this was a one-pan (wok) meal, as I first made a wok omelette in a near-smoking hot wok with a swirl of wok oil, quickly bubbling then folded and removed without a bit of sticking, to slice up and add back in.  I also had about ¾ cup of cooked white rice, brought home from lunch out a day or two ago when we sought air-conditioned refuge in a favourite Vietnamese restaurant.

Perfect for two, where the bulk of the stir fry would be nearly 2 cups of sliced chayote and everyone else was there as supporting cast.

Grateful for my newfound appreciation for chayote, Thank you to Grace Young, and to my paternal Grandmother even though this might not be how she would have ever served it. The word for this funny vegetable was stored in my head all these decades, waiting for the right moment.

Saturday simple, synchronicity and luck since the fridge also was complaining about the heat! 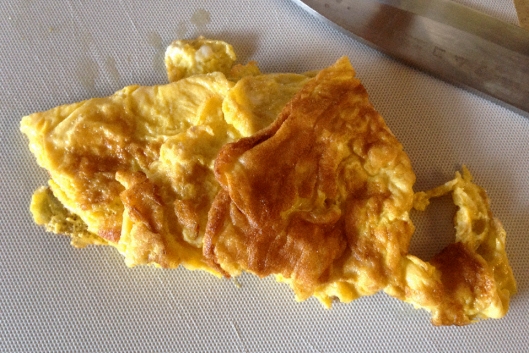 Heat wok until water sizzles, then swirl in 1 Tablespoon wok oil (or avocado oil) and immediately pour egg in from a height, swirling to coat bottom of wok and then let it start to bubble and set before folding over and flipping it, removing it just as it starts to brown, and slice it into pieces. 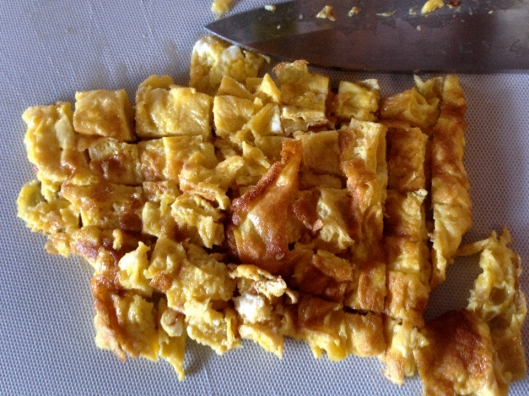 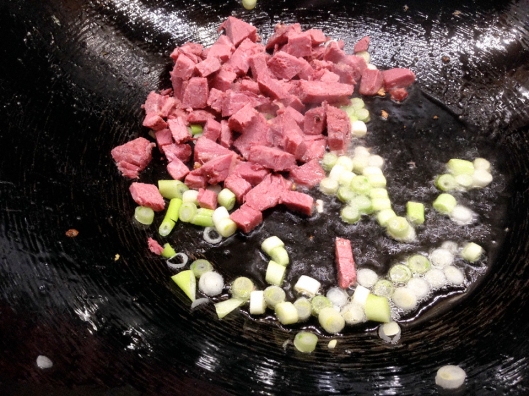 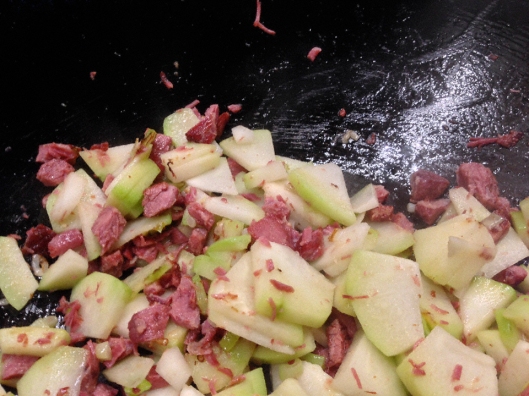 Add 1 Tablespoon oil to wok, then add scallions and corned beef, stirring for 2-3 minutes until starting to crisp, then add chayote and continue to stir fry for another 2-3 minutes. Add peas and stir fry 30 seconds.

Add remaining oil, then the rice, stir fry for 1-2 minutes before adding the soy-Sambal seasoning, then the cilantro. stir fry another minute then add wok omelette back in and heat through.  Divide between two large bowls, and serve with lime or lemon wedge.

If you are on Facebook, please come by the Wok Wednesdays page and check it out! It’s a great community.