The idea of a delicate spinach dish was an interesting departure from some of the firm vegetable and crispy contrasting dishes we have made as a group in Wok Wednesdays.  This one originally was created as a chicken and spinach dish, using button mushrooms. For a vegan lunch, this recipe was a perfect match.  My alterations were to use tofu, a firm one from Hodo Soy which makes some of the best tofu I can find, and Brown Beech (Bunashimeiji, grown in California by Hokto Kinoko).  Both of these companies, Hodo Soy and Hokto, offer terrific organic ingredients and I feel fortunate to easily access products from both here in the Bay Area.  In place of chicken broth I substituted a vegetable broth, using Rapunzel, which is both vegan and GF. Although I used a low sodium soy sauce, a gluten-free Tamari would have worked equally well. In pace of rice wine I would suggest sherry as wheat does show up in many of the Shao Hsing examples I have found, should you be sensitive to gluten. Although I am not, I do prepare dishes for others who are, as well as strict vegans so I am happy to find recipes that easily adapt.

The recipe comes together with very little work – and I shortened the wok washing cycle by pre-cooking the spinach in a separate saucepan, and using baby spinach, it only took a moment, just beyond blanching to a wilting. Then I would drain and press all the excess water before chopping it roughly.

The Breath of a Wok is the second book that the Wok Wednesday’s Facebook group has cooked thru as a group (in previous years, we cooked recipes from Stir Frying to the Sky’s Edge), both written by Grace Young.  Each month, two recipes from the current book are selected. This one, normally made with chicken, is a delicately sauced dish that allows each element to shine.  Of course, if you have made homemade stock, that is absolutely the best way, but do not let that stop you from trying this recipe with good quality chicken or vegetable stock.  A very light touch — a sauce gently made thicker with a bit of cornstarch, it is not heavy-handed in any way. I used exactly the same marinade as you would for chicken for the tofu, and when it was seared and stir fried, a light crispy edge was created, which thickened the sauce when the dish came together at the end. 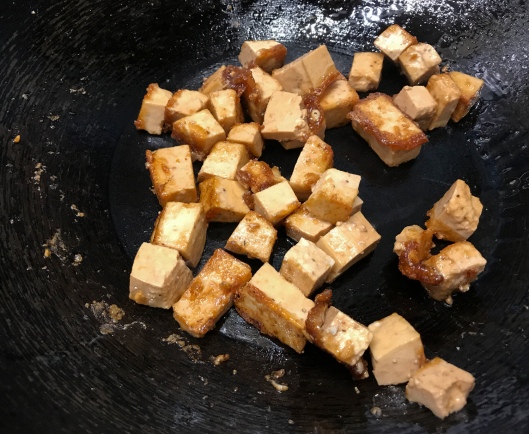 I like using Beech and Maiitake mushrooms in my stir fry dishes where they add a nice texture and taste, and they are not so exotic as to be challenging to most folks. a moment more all together at the end and the juices (or liquor) from the mushrooms added a nice umami to the dish.

The only other changes I made besides adapting this as a vegan recipe was to omit the small amount of sugar, but I would always suggest first trying Grace’s recipes exactly as written as they are so well researched, and are adapted for success in a home kitchen. This recipe scaled easily for two people as a half recipe.

The recipe for Tina Lao Yu’s Chicken with Spinach is found in The Breath of a Wok, pages 74.  For a wonderful. dramatic and satisfying dish, you also might want to try this recipe on Grace’s website, as a nice introduction to her books. If you have not already visited the Wok Wednesday website or our Facebook group – please stop on in, get your book and wok with us!