Come a New Year, we all pledge to eat more leafy green vegetables (and a long list of other resolutions if you are someone who makes those). My personal effort is to use my wok to change the balance of vegetables in our eating as well as continue to work on my wok skills and patina.  Sometimes, it is about the wok!  But today, it is also about bok choy, a quiet superstar in nutrition and one of the easiest vegetables to cook.

My very good fortune is to have great selection of fresh vegetables for my stir frying almost year round. Within a half hour shopping from home, I have several Asian markets to choose from,  and can almost always guarantee that they will have some good, fresh bok choy on hand. I find it useful in raw salads as well as cooked. It plays well with many other ingredients.  Yesterday’s grocery and cultural shopping found very good baby bok choy at the Korean market that was my first stop, then later at a Japanese market I found more, and lastly, a huge selection at a pan-Asian hypermarket. I couldn’t help but come home with more than I needed for just one stir-fry version of this lovely recipe from Grace Young’s Stir-Frying to the Sky’s Edge, this week’s featured stir-fry for Wok Wednesdays.

My other temptation was beautiful Bunashimeji, or brown beech mushrooms from an organic grower just a bit further down the California coast from us. While they were not a called for ingredient, I loved how nicely they fit in and were a perfect enrichment to the bit of broth left at the end that you can’t resist sipping from your bowl.

When I read the recipe I did a quick check on the ginger method — for tho the recipe says finely shredded ginger, when you look back at the beginning of the book where Grace illustrates and explains methods (see page 42-43 of SFTTSE) it really is a fine julienne! Good knife skills will make this quick, although my approach is a little slower though maybe my personal Zen moment in prep, slicing, stacking, and slicing again. 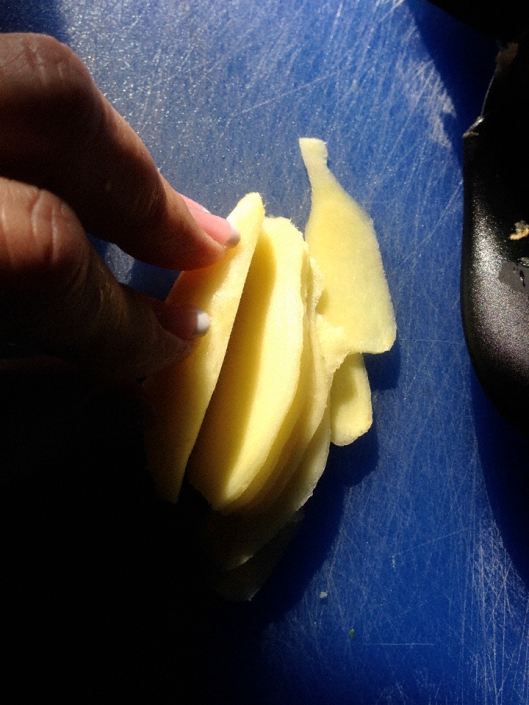 I had my pancetta sliced 1/4″ thick (I used FraMani Smoked Uncured Pancetta, and asked for slices of that thickness), dicing just the amount I needed at home, fresh. It was an improvement over the pre-diced pancettas I have used, though those are easily found.

When I need very small amounts of broth for a recipe (this one required a scant 1/4 cup), if I do not have freshly homemade broth handy, I find a granular form like the Rapunzel vegetarian broth to be invaluable in that not only is it a good vegetarian broth, it is easy to scale your quantities.

Because I was adding an extra ingredient to this stir-fry, I decided to do so early on, so just after the pancetta and aromatics (ginger + garlic) have been added, after about a minute I added the mushrooms (only 100 grams of Bunashimeji) which I had trimmed, washed, separated and made sure were dry). I wanted to keep too much water from the mushrooms from drowning the dish. 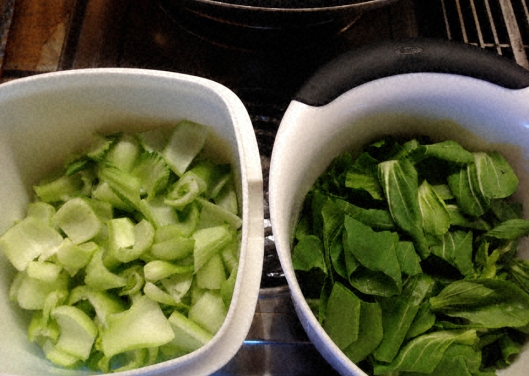 I also separated the stems of the baby bok choy from the leaves after blotting them dry, and added the stems first , stirring them for a minute, then the leaves.  My favourite recent wok accessor was a domed, mesh cover, which I use often in place of a lid, for times when I want to keep some of the moisture in briefly, but want less condensation (as well as less splatter!).

The prep, like most stir-fry recipes, is far more lengthy than the actual cooking. And it is also what makes it so pleasurable and satisfying, especially if you arrange your ingredients for your mis en place in order. The result is a subtle but silky dish with lots of flavour and a lightness. The bit of pancetta (only an ounce)  is just enough of a presence to shape the flavour without dominating the dish or making it too salty or smokey. The addition of the mushrooms complemented the texture and flavour of the bok choy stems.

This recipe is on page 226 of Grace Young’s Stir Frying to the Sky’s Edge. The book is available electronically as well as in print (I prefer the book because I love that experience, but there are times I would rather put a splash guard on my iPad rather than another ‘character stain’ on my book).  If you are on Facebook, please come by the Wok Wednesdays page and check it out! It’s a great community. You may also find this particular recipe included here, from an interview Grace did with Cathy Young (no relation) in 2010.