My appreciation for squid or calamari as an adult was a total surprise to me. I had taken against it as a child, especially if it was prepared with the ink, as my Grandfather would do.  I have tried to revisit that ink part – the most memorable being a risotto that defeated me – I just could not eat it. But then we discovered grilled calamari, calamari in Thai salads, char-grilled calamari and octopus in Greece, and, at a Japanese restaurant, delicately coated calamari done perfectly crisp with a batter so thin it almost shattered.

Now when I see calamari on a menu, if it isn’t described clearly my first question is  “will it be grilled or fried??? “, and if it is batter-fried I will give it a pass. I am much more enchanted by the naked criss-cross slashed curls of perfectly (and barely) cooked or lime juice-cured squid prepared fresh, simple and quickly.  From our home a few miles inland from Monterey Bay, we often can see squid boat lights during the night when squid season is on.

Despite my late-in-life conversion, preparing squid at home had not happened. In fact I probably was rather creative in avoiding it, scared off by detailed cleaning, and not wanting to be disappointed.

Now I am in danger of becoming a one-woman threat to the species. But I promise restraint.

I was excited and challenged to see that Wok Wednesday’s schedule had squid coming up on the schedule this week. I was SO excited I actually jumped the gun and did the OTHER squid recipe first, somewhat by mistake.  A delicious mistake, as you will see below.  I found cleaned, fresh squid at a local Whole Foods, and prepared it last week, enjoying the preparation and making my own little slices crisscrossing, patting everyone dry, and in the first instance, doing the 10-second blanch that insured nothing would get a chance to overcook. It was one of those magic seafood moments when you see the instant change to opaque, whisking it out almost as soon as it goes in the water, then quickly stir-frying the rest of the dish and serving it within minutes.

When I realized my mistake, I had an excuse to buy more squid. This time it was also wild caught, but had been previously frozen, and cleaned of course (I am not too proud to buy it this way). I bought a little extra – I guess you could say we had a little Squidapalooza as once I had the half pound I needed for the Malaysian-Style dish, I also had extra to try two other ways. I declared it squid tapas night.

First, a small amount of just the tentacles (no tubes), salted and rinsed, patted dry on paper towels, then quickly fried in a searing hot cast iron pan with a small amount of oil. We cooked them long enough to pick up a little char on the edges, almost crisp, then served with a squeeze of fresh lime juice.

Second, I did my WW stir-fry, having prepped all the tubes plus some tentacles, and weighed what I needed for that, reserving the remaining quarter-pound for a finale.  There is something quite calming about precisely scoring the backside of the white tubes, then cutting the sections into nice little squares or triangles. Measuring everything else, and making sure you have everything on hand makes the stir-fry a bit like a familiar dance. Even if you have never cooked this dish before, I find the prep helps set you in the right focus of mind to enjoy and not panic the speedy assembly.

Even dicing the pineapple can be an exercise in creative knife skills. I added a little extra tomato, partly because I was using Tabasco in place of a Malay-made hot sauce, and also because I had managed to arrive just at the last moment in time to bag some beautiful late-season dry-farmed Early Girl tomatoes from my favourite farm at the Sunday market in Santa Cruz. When I realized I had forgotten to buy scallions, I added a little extra shallot since I had some beautiful ones.

This dish was so quick, and so delicate, very pretty, and I will carefully dial-up the heat a little, since I started with just a bit over a teaspoon of tabasco. The squid was beautiful, pale and opaque, and once again, I am stunned at how nice tomatoes are in a stir-fry. This recipe is found on page 174 of Stir-Frying to the Sky’s Edge. 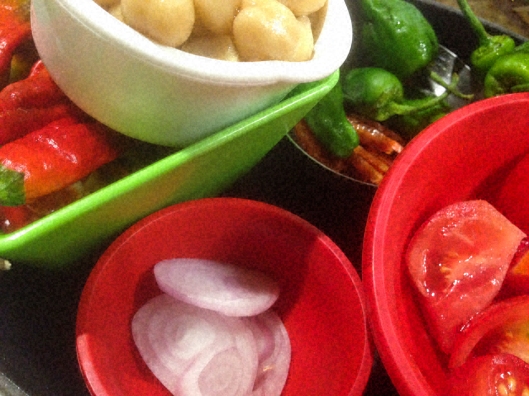 The last dish of the evening was a mixture of peppers, red shishitos (late-season with a bit of heat to their bite) and Padrón peppers, slices of dry Spanish chorizo, freshly cooked chickpeas and more tomatoes. The squid was an ensemble player as I tried to recreate the flavours of the excellent Calamari à la Plancha from the late summer menu at Chalkboard, a terrific Sonoma County restaurant with excellent small plate offerings. Mine was different, but carried the freshness and immediacy of using my stash of calamari as many ways as I could! Also, not bad for winging it.

But what actually gave me my confidence was the first recipe I made, anxiously jumping into the project without realizing I had the wrong recipe. A delicious mistake! On page 170, you will find Stir-Fried Squid with Black Bean sauce.

This recipe had more pieces, and a bit more preparation, but is immensely satisfying and made a great one dish dinner for two, served with some California grown semi-brown rice. The flavour is more complex, using oyster sauce, soy sauce and dark soy sauce, Shao Hsing rice wine) and the contrasting crunch of snow peas. I actually inverted the ratio of snow peas to squid, but with the blanching, you can easily cook the entire pound of squid in a 14-inch wok without any issue. I just loved the look of the snow peas and this was actually my FIRST squid adventure so I played it a bit safe. I would keep the doubled snow peas AND the full whack of squid for future dates, and trust me – this dish will be a regular dinner date in our wok.

As always, I encourage you to get your mitts on a copy of Grace’s excellent tome, not only Stir Frying to the Sky’s Edge, but also Breath of a Wok. 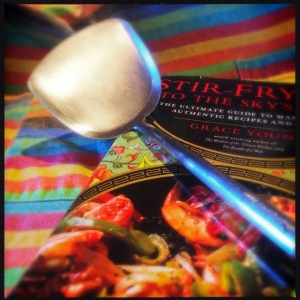 p.s. I think ALL three dishes could have been done on my wok, as sequential stir fries, but since we did use a cast iron pan for the tentacles, I used that for the last dish as well.

I also really preferred the fresh squid and will choose that whenever practical.

The Malaysian-Style Stir-Fried Squid recipe is on page 174 of Grace Young’s Stir Frying to the Sky’s Edge. You can find the Stir-Fried Squid with Black Bean Sauce on page 170. The book is available electronically as well as in print.  If you are on Facebook, please come by the Wok Wednesdays page and check it out — it’s a terrific source of wok-support for your new habit.