When I looked ahead at the Wok Wednesday schedule I was really happy to see lemongrass chicken coming up. Not only is it an irresistible menu item for me when I order out, I had a secret plot. Ever since I had a fusion taco (which actually was a Vietnamese lemongrass pork), I knew I had to be able to have this on-demand.

Because this is such a quick and easy dish, consider it my post-holiday gift to nudge you in this direction after a long weekend at the BBQ. Come mid-week, you will thank Grace Young for her flawless coaching and your delicious weeknight dinner.

Lemongrass is my catnip.

The first time I had lemongrass pork as a taco filling was at a fund-raiser for the Yu-Ai Kai Senior Center, a sake walk through San Jose’s Japantown. Two food trucks were invited to participate so that the revelers walking from one sake tasting spot to the next, completing their maps, would also be able to have a dinner on the go or at least a nibble more substantial than the small teriyaki cracker cups and such that various stops on the numbered map would offer. Without the food trucks, the Japantown restaurants would have had to turn many people away that night. Also, once seated for a meal, the sake walkers often abandon the quest. While we most often end up at Minato, our favourite J-town hangout, if I am going to be sipping sake I dont want to start on an empty stomach, so I usually head for Porky’s and order exactly the same thing as if paralyzed with lemongrass craving.

Seeing this recipe, I also liked the idea of playing with chicken, using either thigh meat or breast meat, and was very surprised at my results. I tend to select the darker meat for my home cooking – whether I am stir-frying or creating a moist stew, because it tolerates longer cooking and is a bit less delicate. I rarely have problems with the white meat being dry as long as I select chicken from good sources, organic, air chilled is my standard for any poultry for home cooking. Since meat is not a huge part of our grocery budget it makes sense to me to be very picky. I decided to cook both for comparison!

Of course the first batch had to be to put in tacos, so for that one I chose thigh meat and cooked straight to the recipe.  Like most stir-fry dishes, the time is all spent in the preparations, and once you start cooking it all goes by in a flash, so assembling everything in the calm of prep-time is crucial to enjoying and being successful in wok cooking (and I suspect MOST cooking works better this way).  Mis en place is my wok mantra. 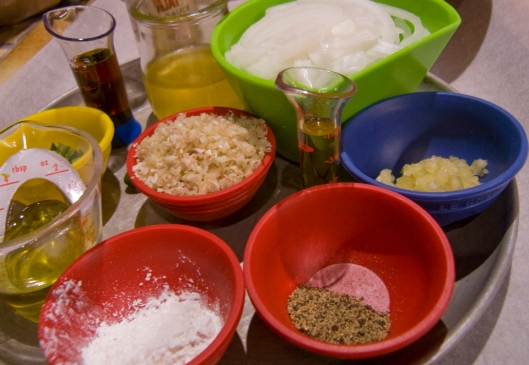 Both versions come together easily, and where I took an extra five minutes to quick pickle some carrot ribbons and wash cilantro to garnish the tacos, I could easily have spent the same time starting my rice or even delegating that to the rice cooker. I prep and measure all ingredients except the meat, leaving that in the refrigerator UNLESS the meat needs to sit longer in a marinate. The time it takes me to cut it up is always plenty of time to bring it to room temperature before I start cooking.

In this recipe, the chicken simply is tossed with cornstarch, salt and pepper and a bit of sesame oil almost immediately before cooking. Once suggestion, if you can plan this ahead, is to place the chicken in the freezer for 15-30 minutes to help it stay firmer when you are trying to slice it up. You definitely will want to let it come up to room temperature before you start. Grace has a good discussion of meat and poultry prep on pages 66-69 of SFTTSE . This recipe is one that would benefit from remembering both of these tips. My slicing is never as neat with wobbly chicken.

For the second time, with chicken breasts, I used a combination of scallions and red bell pepper in place of the onions, and garnished with a bit of lemon zest, having flavoured my rice with lemon juice (a little tiny bit of Greek-girl fusion crept in here). 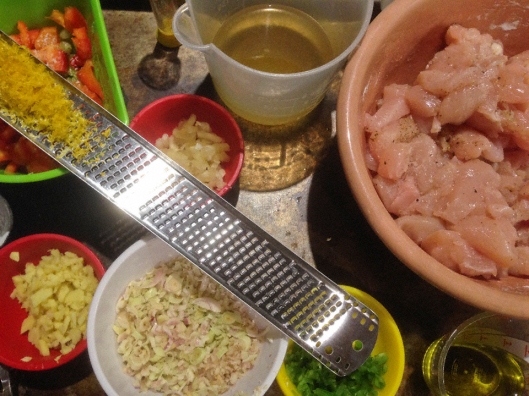 The only other difference was my confidence, having run through this recipe a few days earlier, I felt much more relaxed and was super pleased with how nice the browning was with the chicken breasts. Nonetheless, both went well. The meat is cooked first, until browned but not all the way through. Then you remove that from the wok, add in your aromatics, and return the meat to complete cooking at the end. The lemongrass and ginger get such a nice brief cooking that they retain their flavour and a little bit of texture, depending on how finely you chop. The first time I made this dish I chopped the  lemongrass quite a bit finer, and it almost disappeared into the dish. It was more detectable when I left more slices  or coarse pieces in the second time, but still very nice, if slightly crunchier.

The thigh meat, in the wok:

The final assembly of the tacos was at the table, so I had a DIY serving:

and then the chicken breast version the following week!

Once again, no leftovers!

I have to admit that in between cooking these two delicious dishes in the wok, I did some less carnivorous cooking, searing eggplant and a tofu triangle dish that I adapted from having successfully cooked eggplant several times in the wok. One of the lovely things about going through a cookbook on a schedule, like taking an art class forces you to spend a regular time in the studio, you are spending regular sessions at the wok. It tends to live on the stovetop more often than not. When it is in my line of vision, I consider it for more possibilities than when it is hanging up.

This recipe is on page 143 of Grace Young’s Stir Frying to the Sky’s Edge. The book is available electronically as well as in print (I prefer the book because I love that experience, but there are times I would rather put a splash guard on my iPad rather than another ‘character stain’ on my book).  If you are on Facebook, please come by the Wok Wednesdays page and check it out! It’s a great community.