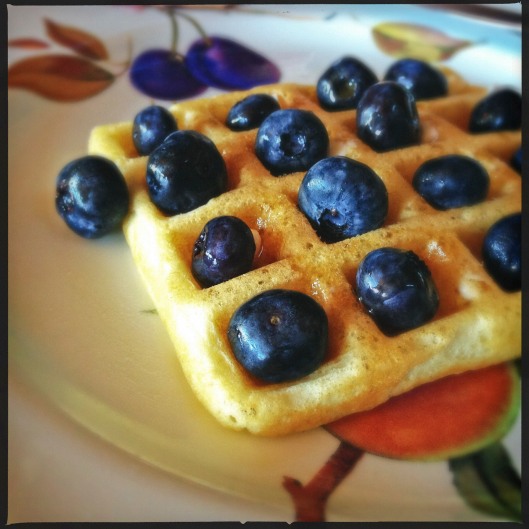 A bow of the heart to Marion Cunningham, whose recent passing made me reminisce on breakfast.

Our preferred way to deal with Valentine’s day is to cook for each other. An early Easter this year meant we also missed our Pancake Tuesday opportunity as we were away (I was having my pre-Lent farewell picnic of cheese+cured meats+chocolate). With no elaborate scheme, breakfast was very likely some yougurt+blueberries.

Then Saveur sent out a tweet directing me to 50 lovely breakfast ideas (most now forbidden by my self-imposed restrictions). Right near the top was Marion Cunningham’s yeast-raised waffles.

I rarely eat waffles or pancakes. I do have many vices – but most are not for sweet breakfast items. On rare occasions I will make a batch of Marion’s Silver Dollar pancakes, or some healthy ricotta oat pancakes from Phase II of the South Beach Diet, and I used to make Cafe Beaujolais’ pecan waffles. But, all of these I make rarely.

After a quick negotiation last night (a home of two keen cooks, we volley the cooking lead based on who is inspired), I quickly assembled the batter for Marion’s yeast-raised waffles, encouraged by only 1/2 teaspoon of sugar to the half-recipe and space in the fridge. I would take a little real maple syrup on them though!

Having spent the greater part of my life in and around the Bay Area, many of my ideas about great breakfast are shaped by adventures with lifelong friends. We would go to breakfast at Bette’s, Bridge Creek or Fanny’s, willing to hover outside for a table to be available, consume cup after cup of darkly roasted coffee (my preference back then), Once we were seated, we deliberated between the apple-brandy or rum-banana souffléd pancake at Bette’s vs. their potato pancakes with applesauce, or at Bridge Creek, just going straight for the Silver Dollar pancakes versus everything else on the menu. My copy of The Breakfast Book by Marion Cunningham was given to me by the same friends, and has penciled dates written next to the recipes as I tried them. It is one cookbook which never is in danger of my annual cookbook library pruning. 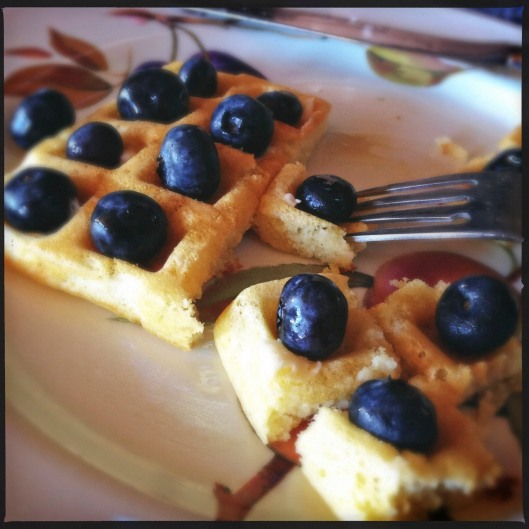 I am not a big fan of syrupy breakfast cakes or french toast (tho I can turn out a pretty decent version if requested by guests). Weekend breakfasts are often easier to gather folks for, instead of  evening meals.  Mind – I do not begrudge my family members who love sweet breakfasts – although for some years I did not sit next to their children, after an excited young cousin poured syrup on my lap whilst I cut up her pancakes or waffles!

All is long forgiven – she didn’t mean to douse me in syrup, and she grew up to be a wonderful and kind physician. I like to think that those breakfasts out, or weekends making Æbleskivers together at a family house,  are fond recollections for them as they are for me.

Breakfast can be a Valentine to those you love – whether cooked by you or shared with love at a favourite eatery. Thanks to Marion Cunningham, and my friends, family and mate, for making them so inspired.  Any day you like.

Ruch Reichl wrote a beautiful remembrance to Marion Cunningham in Saveur’s Jan/Feb issue. Bette’s Oceanview Diner is still open, although both Cafe Fanny and Bridge Creek have since closed, defining an era of culinary awakening for many of us.